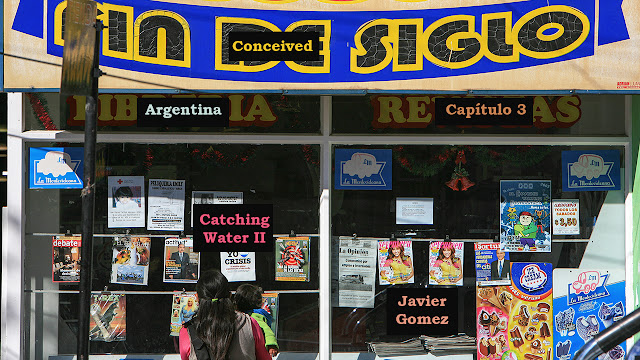 “Excuse me, miss. Do you have The Alchemist by Paulo Coelho?”

The question pulls her back from the depths of pain and memory. She smirks.

“Sure. There are three different editions, let me show you. Over here.”

A few more of those interactions, some book shelving, and her shift is done. She says goodbye to the air – her co-workers immersed in their tasks. When she leaves the shop, Placebo’s Flesh Mechanic is playing on her headphones and she sings along. The line “Aristocratic parents / a rebel with a heart of gold” seems made for her, Nadia always chuckles when she hears it. They were on holiday one time – she must have been three or four years old. The hotel was a lavish, almost preposterous 19th century building perched on a cliff somewhere along the Argentinean coast. She woke up at 5 a.m., and it was Sunday and she wanted to meet the other guests so she went out of the room and knocked on everyone’s door. Her mum ran behind her and tried to shush her, but there was no way to reason with Nadia who replied, “we like to wake up early,” when confronted with the possibility that the rest of the hotel might have been asleep. That was spontaneous and younger Nadia. The current version is moodier and sighs whenever she catches a glimpse of untainted bliss or innocence.

She turns right on Sarmiento Street, only two blocks to her house, and there he is. Ale, leaning up against the wall of a shoe shop and smoking. She’s about to turn back when he raises his head and sees her. A smile breaks his deadpan façade as if nothing ever happened.

“Fuck off. I’m not your love. We’re not anything anymore.”

“I have friends. They treat me better than you.”

“Don’t be like that. I told you I was in a bad place, not thinking straight. I’m off it now.”

He smiles. She sighs. The same conversation with slight variations. Makes her think of the Multiverse in comics, how there are infinite versions of each planet with small changes. The same character with a different cape, more hair or a wacky additional power. But she knows you still buy them. No matter how ludicrous the plot is, no matter how many times they are about to face the end of the world. You still pay the price both in time and money and read through the half-assed battles that should be epic because you know it will all end well. So she sighs and smiles back.

They get back into their shared moments, step by careful step at first. This time he seems calmer. They both love live shows, and they roam around the city center from gigs to bars and gigs in bars most Saturdays. Some Fridays too, even when she hates working with a hangover. On Sundays they go to the park, their studded jackets and pins and patches sticking out of the throng of average families eating popcorn and cotton candy. One of those afternoons, they are talking about Rancid and how they think they’re The Clash but they are delusional. Then she spots Leo in the distance. She doesn’t make eye contact and laughs at some random comment from Ale, a way to disarm the bomb in her head. As they pass Leo and his friend, she ventures one look back. He doesn’t seem to notice Nadia – he just looks at the brown water with hollow eyes. She stares ahead and squeezes Ale’s hand, but he’s too distracted berating Californian punk. It will be different this time, she swears. It has to be.