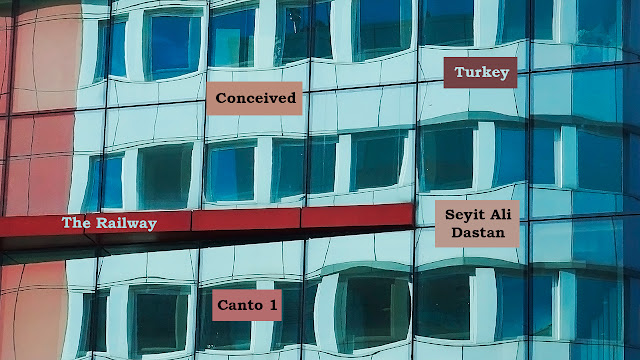 That May afternoon in 1984 was not a fabulous one in itself, but I remember the day as an entirely fabled chapter of my life when the truth can’t be distinguished from the tale. Were the borders between these two blurry on that day? Or was it just a kid’s mind confusing solid and rather painful facts of life? One-third of a century has passed since those years, but I don’t have a clear answer to this question and am still sailing between the fairies of open seas and a concrete pier connecting us with the alleged realities. At the age of six, though, I was living in Wonderland braided with railways on the poor outskirts of Kayseri, a city in the center of Turkey.

On that late May afternoon, when my mom and I exited the main gate of the State Hospital, I was holding her hand and watching the central railroad station across the highway, a ring road encircling Kayseri. Both the hospital and the railroad station were built at the edge of town, facing each other and giving access to people living in the smaller surrounding towns. However, it was a period when new districts were opening beyond the hospital, railway and the ring road, since Kayseri, the mid-level industrial city, was seeing immigration from its rural periphery. And our home was also in a newly built neighborhood, one called Yeni Mahalle or New Neighborhood.

We needed to go back home by minibus, since our home was not so close to the hospital. While my mom was checking her pockets for the minibus fee, I just rode down the iron guardrail again and again. I finally crashed to the ground but it did not hurt much. My mom rushed over and grabbed my hand, saying:

“Son, you will break your bones. We’ve had enough of the hospital for today!”

“It was you, mom, who visited the doctor, not me,” I replied.

“You little monster, your tongue is taller than you are. Come here!” and she stressed at a lower volume: “Never let go of my hand again!”

She dragged me down the stairs to the pavement but kept checking her pockets. She was wearing a purple thin coat extending to her feet. This coat was like an extension of her persona, as she had been wearing it for nearly an entire year. It was a lighter tone of purple, and she wore it by tying the belt around it. I very much loved this coat. Of course, I identified it with my mom. But more than that: My mom hid me inside her coat when we waited for public transport in the cold, windy or rainy weather. And I very much liked sticking my head out of her coat and looking around, feeling her affection and warmth – both physically and emotionally.

She checked her coat to buy a return ticket home but finally realized there was a tiny hole. As she traced the bottom of the coat’s inner lining, she found a coin at the lowest part of it. We could touch it from outside, but had no idea how many liras it was? Then we moved to a secluded corner next to the stairs and slowly pulled this mysterious coin to the hole in which it had fallen. It was 50 kuruş, meaning half a lira, embossed with an image of a traditional Turkish farmer girl. My mom closed her palm and said resolutely, “We will walk.” This was how we started trekking back home on that late May afternoon.