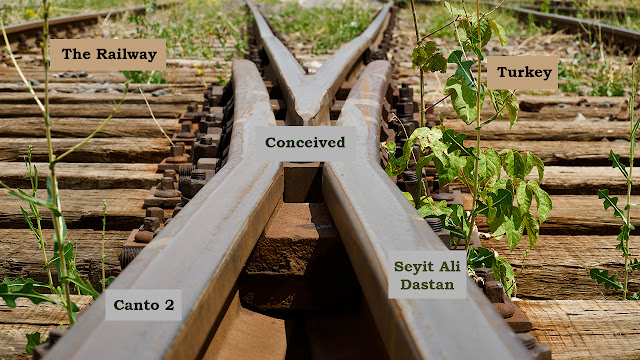 We walked across the highway, with my mom was firmly holding me. She said we would take a shortcut through the fields away from the roads so that she would not need to hold my hand. We then entered a path through the fields. It was a little wider than a trail and lined by tall grass from the spring rain. Even though I was able to partly see these fields from above when we went by bus or minibus, this was the first time I passed through them. I was walking in front of my mom. The grass was so high that I felt like walking inside a tunnel towards an unknown world.

The notable difference between the center of town and these fields was that I could feel the wind much better. The wall of the tunnel, grass and brush were moving with the wind and I felt like I was ensconced by rhythmically swinging plants around me. The ground was dry. Even if it was spring. May at that year must have been warmer than normal since otherwise the ground would be wet and we would have to avoid mud. I was walking quickly in this strange world and sometimes getting out of my mom’s sight. In such cases, she would yell from behind me “Ufuk! Wait, son!” I would stop for a moment, letting her see me, and then speed up again and even run.

This chasing and game of hide-and-seek ended when I reached a tiny creek. These creeks were either natural branches of a river, a terminating and fading edge of a larger river, or an irrigation channel. In every case, they were used to irrigate the vegetable planting in these areas. As I reached the creek, I climbed a smallish bank to look around. Ahead of the creek, there was lettuce and cabbage lined up waiting to be harvested. The rows of beans were yet to grow but the sticks that beans would cling to and rise on were already fastened in the soil. The patch was filled with some tinier and shorter greenery such as parsley and spinach. There were some silverberry trees randomly scattered around with dizzying scents permeating the area.

When I turned back, I saw my mom putting one of her hands on her forehead and looking at me. She was hardly breathing and seemed tired, although we hadn’t walked too much.

I went back to her. She extended her hand but I ran away again. She yelled from behind: “Slowly, please. Walk near the creek. Don’t get too close to it!”

We started to walk alongside the creek. This creek and others around it would be the first to die in the transformation of these areas over the coming years. They were dried out, and the vegetable farming ended. Farmers and landowners started to sell their fields to building contractors to develop the area. During the next ten years, almost the entire space we were then walking through would turn into a new district within the city. The area where we were walking at that time would host streets, shopping centers, mosques, municipal social facilities, schools, and of course residential units. The original city dwellers would remain in more central locations for another decade or so, while these newly opened construction areas were filled by immigrants. But these new districts would get older residents in just two decades and then, in the 2010s, streams of new immigrants flocked to them.

At some point, the creek became wider and thus shallower. It looked like a small pond encircled by local trees. These were poplars and willows commonly found in central Anatolia. They can easily and vigorously grow in watery areas like this. The willows create a poetic impression while the poplars produce harmonious sound in windy weather. That is why this place seemed to be used by locals and farmers as a picnic or resting area. There was burned charcoal, some purposefully placed smooth stones for sitting as well as pieces of wood. I started to throw pebbles at this pond-like body of water while waiting for my mom to catch me. She finally came there and leaned on a stone. As I was throwing the rocks, we were both listening to a pastoral symphony of rustling poplar trees, and plops in the water from the falling pebbles and the gentle splash of the creek. It was an exceptional moment. I was feeling the eternal resonance carved in my soul. A kid does not have the woes of the past because he doesn’t have a past, and he has no concerns for the future because he can’t comprehend the predicaments ahead. That often makes childhood the most beautiful interval of a person’s entire life, a period which many people reminisce on later. This was my case. On the other hand, my mom is like a Tarkovskian character behind me, sitting and resting on a cold stone, looking at me and struggling to drift through the turbulence of her life.

This hypnosis enslaving both of us finally ended when I see a swing hanging on the willow tree and emptily moving with the wind. I asked my mom to swing me on it, and she agreed to do it. After a few minutes, she said that we need to go and arrive home before the sunset. We kept walking next to the creek until it reached a railway. At that cross-section, the creek was sent through a large concrete pipe under the tracks. This was where we changed our path and started to walk along it.