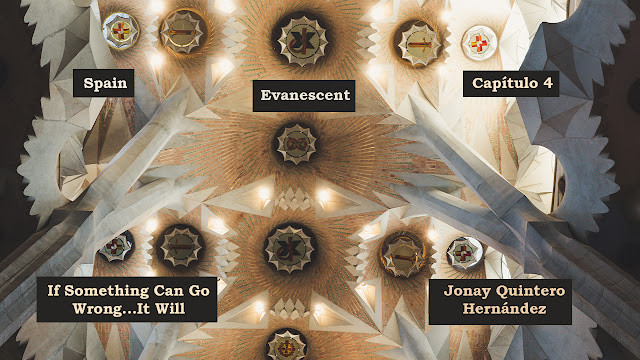 “Hey, it’s late at night, why are those people whistling? Don’t they have a house to go to? Don’t they sleep?” said one of the two gangsters who had come from the mainland. He looked too nervous to be a professional. Edelmiro saw a possible hole in their plan that he might be able to exploit. “They are searching for me, and it won’t be long till they find us. This is an island, a small one and everybody knows everyone here. How do you expect to get away with this?” wondered Edelmiro.

“That’s none of your business,” replied the taller one. “Shut up or we’ll kill you… well, I won’t lie to you, we will kill you anyway. In fact, we’ve come to this shitty island to kill you.” “But you know you won’t be able to leave the island alive after knocking me off, will you?” “Well, in that case we will all soon be dead.” Edelmiro reflected on those words for a little while… a few months ago he probably would have embraced death as liberation from a life he didn’t want. But now he had a family… That’s why men with families shouldn’t go to war or work as hitmen. It is hard to risk your life when there’s so much at stake.

The last thing I remember is being in front of the house, shouting at the girls and Aunt Amalia trying to make them understand. Then, everything went black. I was awake now and didn’t feel pain anymore, though I was surrounded by a weird mist. There was a white light that invaded everything and didn’t let me see the details of the objects around me. In a careless way and without knowing where I was heading, I began to walk. I couldn’t say for how long. Fortunately, I was kind of alien to fatigue. There wasn’t a way I could possibly get tired. Or at least that is what it looked like to me. I was ascending a hill I should think, but couldn’t tell for sure. Suddenly, I found myself in front of a large door that led who knows where.

Next to it there was an old man sitting on what looked like a throne. He was dressed very strangely, as if he were a medieval bishop or pope. He was wearing a bishop’s miter and had a bunch of keys in his right hand and a stick in his left. “Peter?… Is that you?” I dared to say. “Hello Kunta, you good old fellow! Am I…dead?” “Your body certainly is, mate.” “You had seven lives but your body wasn’t bulletproof, and you also lost a whole lot of blood.” “So is this…?” “Exactly, this is Heaven’s Door.”

“Wow, I’ve always thought that I would end up in hell.” “Sorry to disappoint you but hell is where you come from, it doesn’t get any worse anywhere else.” “Hum, I never thought that heaven would be like the Catholics say.” “Well, actually it is not. It’s just that we are adopting a multicultural approach to our business lately.” “How come?” “When a Catholic or somebody acquainted with catholic culture arrives here, I salute them; when a Hindu arrives, that is usually on Vishnu’s shift. We try our best to make everyone feel comfortable, but to be honest we are running out of hours. Besides we’ve received several complaints from our union, which considers the tradition sexist and discriminatory for women, and I think they are right.”

“What the f… ? What does God look like, have you met him?” “Well, that depends on the eyes of the beholder…” “God is like an old car inside a garage with the lights off. Christians have touched the body and thus believe that God is metal; Jews are touching a window and are convinced that God is glass; conversely, Muslims will touch one wheel and think that God is rubber. The Buddhist are still in a corner of the dark garage reaching out into the emptiness, so they think that there is no ‘physical God’.”

“But what have become of the others, how does this story end?” “Well, Edelmiro was finally rescued; his captors were killed, their bodies thrown into the sea; Aunt Amalia and Uncle Restituto were kidnapped by aliens, while the girls (Amelia, Luisa and Moneiba) have formed a polyamorous community in the small village of El Mocanal, a real scandal, but times are changing, don’t you think?”

“What I think is that this is one of the dumbest endings ever. It is even worse than the end of ‘Lost’.” “Actually, if this ending were written by ‘Lost’ scriptwriters, you still would be alive and the rest of the characters would be dead, speaking within a church, so don’t be so salty.” “Okay, you’re right. No offense meant. Respect.” “Come in pal, I have to introduce you to a lot of nice people, of two and four legs.” “Thanks for having me, Peter, you’re a nice chap.”