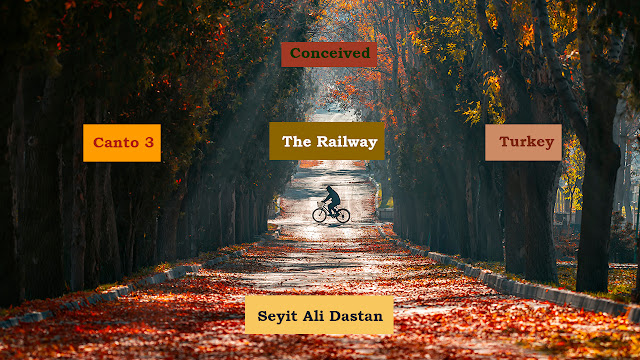 I was walking right on the railway itself, while my mom was on the ground. The bed of the tracks was a bit higher than the ground, like half a meter, and there were no trees close to it. I was moving on the steel bars like an acrobat, changing and running between them by leaping and hopping over the tracks like a squirrel.

At one point my mom called me “Ufuk! Son, Wait.” I stopped and looked at her. She continued “Don’t make noise!” At that moment of silence, I was barely standing while my arms were open to keep balance with a single foot on the track. The only thing I could hear was some calls of the birds and the rustling of the wind on the plants. Then, my mom climbed the railway. She put her head on the iron bar for a second and then called to me, “Come here son, put your ear on the bar like me.” She put her left ear on the bar and I put my right ear on it. We faced each other so close that I could feel her breath. As I gazed in her eyes, I saw thin bloodlines in the whites, as if she had just cried.

“Shh!” she said and stressed, “Just listen; you can hear it”.

As I was looking right inside the pupils of her eyes, I could hear a deep noise or a deep roar. Where was this sound coming from? From the depths of the world or from somewhere inside of my mom? Was it the whizz of the big bang or our hearts beating? At that moment, I had no idea what that sound was as it increased every second. Then, my mom lifted her head from the track and looked in both directions. She took the last coin, 50 kurus, from her pocket, put it on the track, pulled me away from the railway by my hand: “Watch it now!”

Our eyes fixed on the coin, I started to hear the sound that I had just heard on the surface of the track. As the roar got louder, I finally saw the train coming from where we were heading. The operator blew the horn as it approached us, probably trying to keep us away from it. It was a passenger train with wide windows, so the passengers might see a mom with a purple coat and his little boy holding each other’s hand.

After the train went by in less than a minute, we checked the coin. It was so crushed that it had become a sharp metal cylindrical plate. My mom then put the coin in my small pocket and said,

“Don’t worry, it does not really have value as money anyway. Just keep it as it is.”

“When does forever end, mom?”

My mom was just trying to evade my questions. She could not know that the railway would survive the transformation of this area in the coming years. As the streams and the creeks dried up, the farms were left to some wild weeds, the trees were cut, a new district rose up with a new form of life. However, the railway remained in place, even the buildings were set back many meters. And if somebody were to time-travel from the past to today, the railway is the single benchmark that was both present then and now… A new district has born, grew and changed all around the constant steel tracks of the railway. Those who travel on the trains once saw farms, cows and scattered trees, while now they gazed on fences, apartments, roads and people all around.