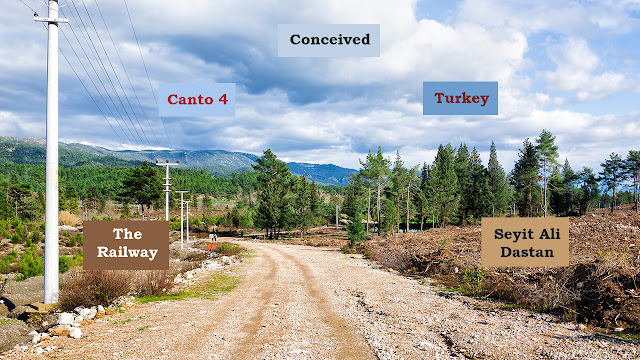 We walked for some time until another dirt path crossed the railway. “We will go this way,” – my mom pointed toward the turn. I jumped on the railway again and passed across it. There were reeds swinging in the wind. It was still daytime, but the evening was getting closer and there were some intermittent gusts.

I saw a strange bird with a reddish crown on it. Probably an endemic species of songbird. I started to chase after the quite uncommon sight for a kid like me. The bird was not flying high, so could easily be followed. It disappeared, but I found it again from its song. This lingered a while. In the end, however, I lost it. I could neither see it nor hear its warble.

Then silence prevailed: no bird calling, no wind whipping, no tree rustling, and no footsteps. But wait, where was my mom? The path of the railway made a half turn, and I could not see beyond due to the long reeds. I started to look at the turn and wait for my mom to come after me. But she was not there. I was out of her sight, and she was out of mine. She usually did not let me go so far away from her, and now she was not coming. I felt lost. Where was she?

Then I dared to walk back to the railway. My slow steps turned faster as I reached the curve. After I had rounded it, I saw my mom on the railway. She was just standing on it, not moving at all. She had taken off her headscarf, and the wind was blowing it together with her coat. It seemed to me as if her body was hovering over the railway. This impression was magnified by the light of the setting sun, which let me see her in a silhouette against the dark orange sky background.

I shouted “Mom!” and started to run towards her. I was leaving dust behind so fast did I run. But she stood still on the railway and did not call me or come to me. I finally reached and hugged her. As she did not bend down, I could just put my head to her belly. She finally responded to me. She grasped my head and gently touched my hair. I felt the same warmth from these hands when they were swinging me a while ago below the willow tree. And the scent of my mom’s purple coat alone was giving me the same sense of endless trust. But my ears on my mom’s belly cannot yet hear the beats of my sister who was still nothing but a tiny hearth inside my mom, and I did not know we were taking three people on our path home that late afternoon.

As we left the railway, I held my mom’s hands tightly and said, “Never let go of my hand again.” Admittedly, during the rest of my life, I did not hold her to this promise. And I lost the gifted coin a few years later. And one evening some 30 years later I took the train to Ankara Airport’s international terminal, leaving her hands back in Kayseri. But in any case, on that late 1984 afternoon, a passenger in a train racing by us would see a mom holding the hand of a kid as well as a kid holding his mom’s hand. And the train would be so fast that our image was momentarily one, and we were in the midst of a swirling pattern of green fields and orange sky, like two indistinct figures in a Van Gogh painting. The metamorphosis from childhood to boyhood and then to manhood might have been started on that fabulous day, each stage leaving some stationary steel traces behind.