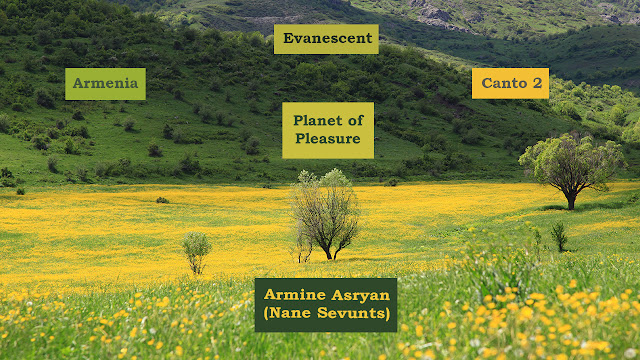 When she woke up it was evening already. She took her backpack and wandered around the city. She visited shops, had coffee in a café, met with some friends and late at night came home to have a deep, healthy sleep.

Her life was full of wonders. She was one hundred percent self-sufficient. Even the young man in her life occupied but a tiny part of it. She sometimes met with him, and they would lie on a sofa or just on the green in front of the house and look up at the clouds for hours. No words were needed. Just two people lying next to each other and feeling their presence. That was enough for them to feel the good and to sense that they were one and were together.

However, their lives were only connected as long as they were in one place. Each had their own personal life and was content with it.

There were times when she would need some energy. Then she stood in the valley, and the rays of the sun gave her the energy she craved. She sat on the grass with her hands up, and the light would suffuse and stimulate her body. She did not move. No motion. Silent acceptance of the energy from above.

On this planet there was no word of God. It was pointless to ask something because everything you needed could become reality by calling it to mind. No one asked whether there was a God or not. Such a question simply did not exist.

The highest virtue on this planet was not love. They did not know how to love one another. But they knew how to respect each other’s space and take care of their own desires. They called it self-interest. I would say that they were the most egotistical people ever. It was all about yourself. Yet, they were able to communicate with evident care for others. They were natural, spontaneous and emotionally pure. There was no hatred, jealousy, envy. How could that arise when they got what they wanted just by thinking of it?

There was no competition, no ambition in this world. People had aspirations in the sense that they wanted to excel in the work they did. Yet they worked for their own pleasure. Work was part of the joy in their lives. They produced art, technology. They engaged only in activities they cared about. One fellow was a fisher… A woman wrote poetry… A trans worked in the local cafe…. An augmented half-robot cut hair. Everything they did was art, a production of attraction and care… They were the happiest beings.

Her days passed with a sense of self-satisfaction and ease of pleasure. There were no limits to her imagination, and she spontaneously did what she liked most at that moment. She trained, jogged, participated in marathons where everybody won. When she was tired of running, she stopped and had coffee in a coffee shop. Then she ran again until she was too tired to move any more. That was the day of sports, and she did that with great pleasure.

Sex, sports, entertainment, work, art, engagement, friends, family, children – all were small parts of her life. The most important person in all these relationships was herself. She liked being all alone, and these were the most precious moments. She had a place on top of the mountain where she would sit for hours. The wind would touch her face, and the sun would cuddle her. She was all by herself. It was wonderful. She was self-sufficient, completely.