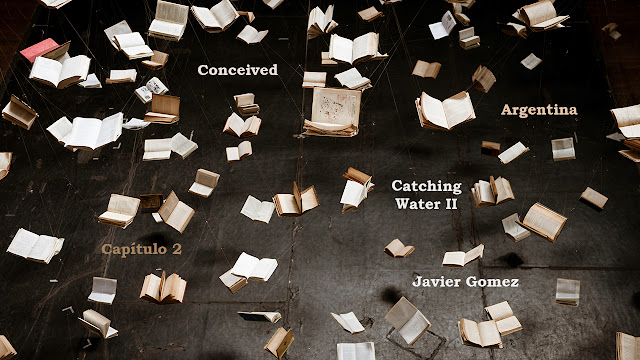 “You spaced out again. New books in the self-help section. Go sort that out.”

She thinks she hears him whisper something. Fuck Juan, he’s a loser. They’ve been working together for more than six months and she knows zilch about his life. He’s just a boring, mediocre retail store employee with a sour face. He makes zero jokes and doesn’t laugh much either. Why bother getting to know someone who doesn’t appreciate your humour? She starts putting the books on the shelves with no intention to finish quickly. If timed right, one of these average tasks can get you through half of the working hours, provided that you get enough interruptions from customers. That also means a sales bonus. She’s never too eager and ends up selling more because of it. Profitable tedium, she calls it. Someday it will pay off. She daydreams about the streets of London, the canals of Amsterdam, the cafés of Paris. Savings should be growing faster, but she always ends up paying for her boyfriend. Is that right? Is he a boyfriend? She’s not sure about that, but they spend a lot of time together. Or at least they did until last month when things got prickly.

Nadia still shudders when she remembers that night. Julia’s birthday. The girl that flirted with her and the disturbing reaction of her boyfriend. They were sort of fine until that day. Everything happened in less than two minutes. Nadia and Paula were talking about music and joking. At some point, they were holding hands. She giggled and thought she was floating. It wasn’t the beer or the weed. And then Ale, Nadia’s jackass of a boyfriend, bolted from the other side of the patio and grabbed her.

They went into the kitchen. A guy was making a drink there and got out as soon as he saw them.

“What are you doing? You’re my girlfriend. We’re together.”

There was something awful in the way he pronounced “my,” almost grinding his teeth. Nadia’s hands were sweating.

“Fuck, Ale. It’s a party. People drink and smoke and flirt with each other. You were talking to someone too. It’s not so terrible.”

“Calm down. Newsflash: my life is not centered on you. I can meet people and talk to them. Does not mean I’m going to fuck everyone in sight. You’re being paranoid.”

“I saw how she looked at you, she held your hand. Don’t treat me like an idiot.”

“I’m done with this. I’m going back outside.”

And then he grabbed her arm. Nadia tried to get rid of him and the next seconds became a blur of noise and fear. She didn’t remember the exact actions, but there was a glass smashing against the wall and she had marks on her arms. When Julia got there, he was grabbing Nadia by the throat. Someone shouted for him to stop. Ale released her and stormed out of the house. She stayed at Julia’s that night, waking up every 30 minutes gasping for air.

A cycle of deranged situations followed by lengthy, crying apologies started that night. She believed him the first time, they were high and drunk, and she thought he might have been under a lot of emotional strain. His family was a mess, she was sure there was something Ale wasn’t telling her. That guy had darkness inside, and she felt how it was growing all the time. A shadow that could consume him, her and everything in between.